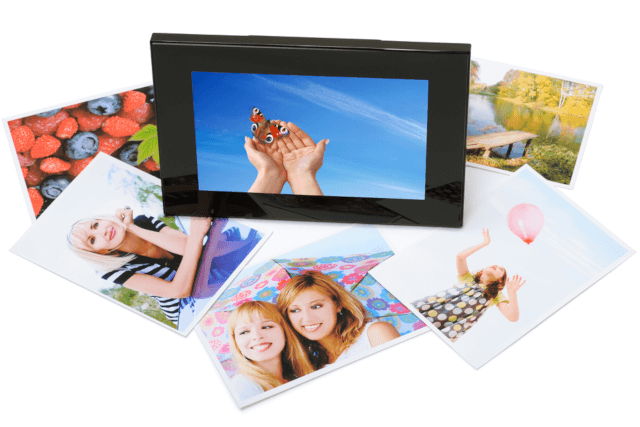 A relatively new product in the digital imaging industry is what has become known as the digital picture frame. These clever devices use a flat-panel TFT (usually just referred to as LCD) screen to electronically store and display digital photos, which can be transferred directly between the picture frame and your digital camera.

They can be powered by either batteries or an AC adapter power supply that plugs into your mains wall socket, and are capable of storing between thirty and more than a thousand digital photos, depending on the frame, the size of the files, and the capacity of the memory card being used.

While most people are probably aware of the numerous advantages of digital photography, there have always been a few areas where modern digital imagery simply didn’t offer what people wanted out of their photos.

With only a slightly wider profile than a normal picture frame, a digital picture frame retains all the benefits of digital photography, combining them with the convenience and most of the features people liked about conventional paper photos.

Digital picture frames solve most of the remaining problems people have about digital photography in a simple, easy to use, and cost effective manner. One of the main problems people have is that they don’t have the time, opportunity, or knowledge required to view their pictures on the computer any time they feel like going through their albums.

Digital picture frames solve this easily, as all prominent models on the market can store multiple images, and display them as a slide show. Most models allow the user to flip through each photograph one by one, much like they would with an old photo album.

Older users, or the very young, who may not be familiar with computers, or may have no desire to learn, will enjoy the practical and straight-forward interface offered by these products. Learning how to use one could be compared to learning just the basic functions of a new television remote-control.

Digital picture frames allow the user to leave a photo on display for the long term, much like a conventional picture frame. This eliminates the cost of maintaining a printer and buying consumables, and allows you to have your picture of choice on display without tying up the computer.

When making a purchasing decision, you should compare the feature set offered by the different models available, with regard to your budget, and what you want from digital picture frames. Some things to consider include:

Having laid down the criteria, it is possible to have a quick look at some of the products on the market today. The very cheapest digital picture frames start at about $85. These offer a very narrow feature set, with a tiny viewing area, rarely no larger than 3”, with relatively low quality image reproduction.

For something of this size, you’re probably better off simply viewing with your existing digital camera, or viewing its image on your television, a task most digital cameras are capable of doing to some capacity. Most of the frames on the market, however, fall between $200 and $450, so we’ll have a very brief look at three such items.

The Wallet uses only CompactFlash card media, meaning that the number of photos you can store is limited only by the size of the JPEG or Bitmap files (.jpg, .bmp), and the storage capacity of your CF card. While the viewing area is just 4” with a 230×200 pixel display, it still manages to impress, weighing in at less than 11 ounces!

It can be run directly off the included AC adapter, which also charges the internal 3 volt lithium batteries. This allows 3 hours continuous viewing between charges, and you don’t have to worry about changing batteries, as you can simply just plug it in again to recharge, much as you would a cell-phone.

VideoChip Wallets offer rudimentary viewing options, either as a static image, a slide-show, as well as the option of several animated image transitions. They can be bought for about $350, making a Wallet a hefty purchase, considering that the main feature is its compact profile.

But if you’re always on the move, or delight in showing your friends and family your photos wherever you are, then maybe this is the one for you.

Ceiva Internet Connected Picture Frame
This really is a remarkable product. Ceiva boasts this as the world’s first web-enabled digital picture frame. When you buy one of these, Ceiva signs you up with a subscription for their service for a period of time – usually a year – then you simply plug a spare phone line into the rear of the frame.

At a scheduled time, say, at night when you’re not making calls, the frame’s integrated dial-up modem connects directly to Ceiva’s servers and synchronizes with your account on their service, which you can configure from your home Internet connection, or by phone if you don’t have a PC!

In this way, you can download new pictures every day, or send them to family and friends also on the service. The frame itself stores only 30 JPEG images, however, your Ceiva account can store thousands, in almost any digital picture format you care to name. Viewing options are wide and flexible, with a full complement of features. The frame is powered only by an AC adapter for constant use, meaning it is not especially portable. It features a large 8.2” LCD display, making it easily one of the biggest on the market.

Ceiva is currently offering a deal for three frames plus a free digital camera with new subscriptions for $340. For what is included this is an excellent purchase, however, if all you want is a digital picture frame, and you are not so much concerned with the Internet capabilities, then you may find the small storage capacity and lack of other more rudimentary features too restrictive.

DigiFrame DF-560
If what you’re after is a medium sized viewing area, with high-quality image reproduction and the most flexible range of features, then the DF-560 is for you. The DF-560 accepts both SmartCard media and CompactFlash cards, stores up 1,500 images on board, which display on a 5.6” high resolution 640×480 pixel LCD display.

Also designed for constant, or all-day use, it is not battery powered, but runs off the included AC adapter. It offers changeable cosmetic frames, which allow the user to have a wood finish, if they’re after the authentic look, or something sleek and modern, giving an impression of brushed stainless steel, as well as everything in between. Again, you don’t need a PC to run this, as it has everything it needs on board, and images can be transferred via either of the storage card slots.

However, if you do wish to use it in conjunction with a PC, it has a 9-pin serial port on the side, and includes a cable and software to allow you to transfer files directly between your PC and the frame, at a theoretical maximum transfer rate of 128kbps, or slightly better than twice the speed of a dial-up Internet connection. The DF-560 offers the widest range of slide-show transition effects, and allows you to prepare a number of customized slide shows using the images of your choice, all on the same card.

As well as scaling large images down on the fly, which it is able to do with the inclusion of its relatively powerful processor, this digital picture frame packs a host of other features. All of this comes at a price, however, and while the feature set is great, the DF-560 retails somewhere around the $560 mark.

If you’re in the market for something to put your digital photographs on display or to show to friends, then one of these could be for you. There are more than just the three digital picture frames reviewed here out there, and this brief examination is by no means exhaustive, but it should give you an idea of what the different features on offer are, and what to base your decision on.

If you’re after portability, then VideoChip’s Wallet may be for you. If the idea and the possibilities of an invention such as an Internet digital picture frame really appeals to you, the Ceiva frame is a logical choice, and cost effective at that. If all-round solid performance and flexibility is what you’re after, and you’ve got a budget to match, then give the DF-560 serious consideration. 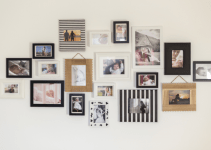 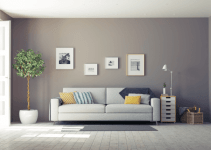